It was a miracle weekend.

Coming in as 17 point underdogs to the defending champions was somewhat intimidating. They were the 5th highest scoring team in league history – averaging 124 points per game to the Horsemen’s 110.9. They were 10-3… the Horsemen were 7-6. The two seed against the five seed, a five seed that nearly missed the playoffs.

Strictly Southern would have their best game of the year and their fourth best game in franchise history. It wasn’t enough.

The mood was poor Sunday night. Ezekiel Elliott just smashed the Horsemen for 29.5 points – they needed a dud from him, they need Dak to carry the Cowboys. The Horsemen would need 24.6 on Monday night from Michael Thomas to tie. A tie wasn’t going to do it, though. They would need 24.7. The Saints would get off to a big lead early, Drew Brees would set his new touchdown record while also setting a record for passing percentage in a game. Michael Thomas was on the sidelines midway through the 3rd quarter.

Finally, for one play, Thomas returned to the field. He caught a screen pass for -2 yards. It was worth only worth 0.3 points, but 0.3 points was just enough.

The Horsemen emerged victorious, improving their head to head record against Strictly Southern to 4-6-1 while ousting them in the playoffs 2 of the last 3 years. 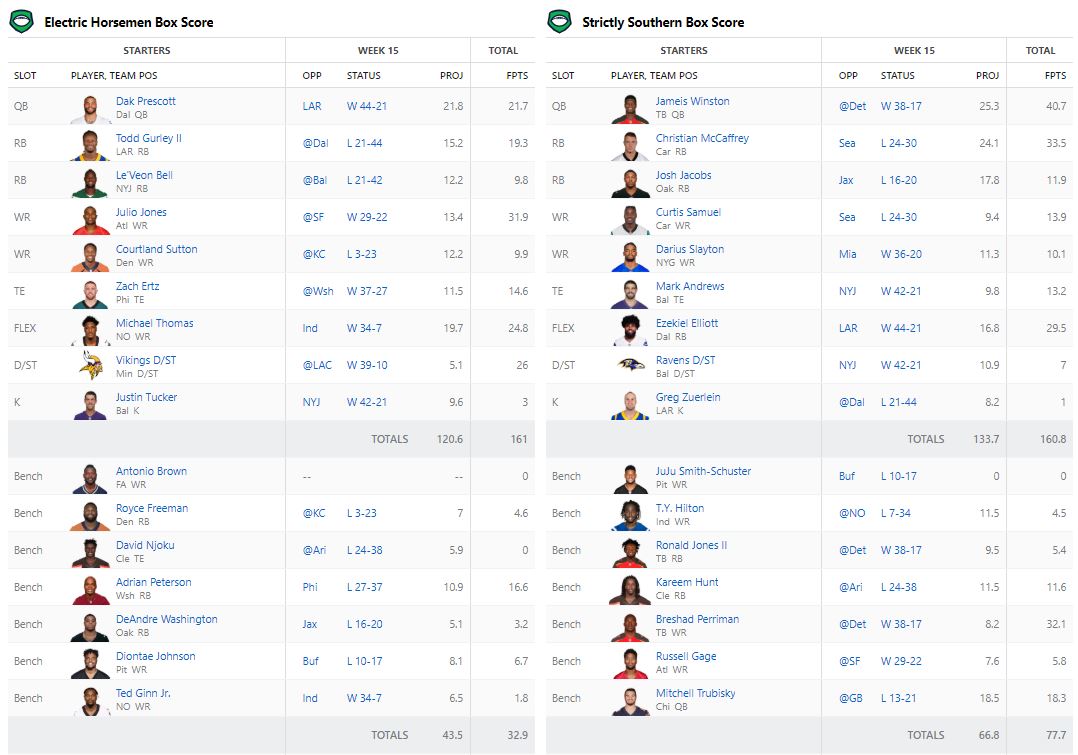 In 2014, Unpredictable was led by the top quarterback campaign in the league, Peyton Manning’s year was not unsimilar to the ridiculous year Lamar Jackson has had this year. But would it be enough to bring them their second championship in league history?

The Horsemen are 9.1 point underdogs with a 47% chance of victory on ESPN.