JULIO JONES GETS HIS 2ND TD OF THE DAY 😳

The real is back.

In his first healthy game since week 1, the franchise leader in games played and points scored would have the 5th best game of his 8 1/2 year Horseman career. In the absence of Michael Thomas,
he and Will Fuller would create a dynamic wide receiver duo – finishing top 4 in the position for the week. Aside from the remaining wire receiver core of the team, there weren’t many spectacular performances. The only other bright spot on the week was Ryan Tannehill, brought in to replace a struggling Matt Ryan, who in his first start with the Horsemen would have the 8th best showing in franchise history.

Unfortunately, Matt Ryan would have done even better. But he did better on waivers.

Straight Laced would come out firing as Deshaun Watson dueled back and forth with Tannehill for the entirety of the Texans game before falling in overtime. Most of the dust was settled by the time Ronald Jones took the field – and the game script led to his taking on a massive role as he scored 25.1 points and sent the Horsemen reeling. Everyone else slumped, though. Chase Edmonds didn’t belong on a starting roster and Robert Woods was dealt a poor quarterback hand. Odell Beckham? He might not even belong in the league anymore.

And the Horsemen emerged victorious. It wasn’t the title defense season they foresaw in the offseason, but things are looking up. Straight Laced falls to a soft 4-2 with the hardest strength of schedule ahead of them. There are no easy schedules, but the Horsemen still have 2 games against the 0-6 teams to finish up the season – two games that may be necessary for either a playoff berth or to evade a first ever share of the bar tab.

The Drunken Aces have seen surprising success this year. After trading away a 2021 first round pick and Derrick Henry (the #4 running back despite having already had a bye week) to 3rd and Unpredictable for DeAndre Hopkins, they were more or less the laughingstock of the league. But things have really come together.

They are the 6th highest unadjusted scoring team in league history – and 12th adjusted. Their 32.5 average margin is 3rd best in league history and best in franchise history. By more or less every measure, this is the greatest Drunken Aces team in Drunken Aces/Tenacious Taco Tasters history. After a week 1 disappointment against Dumpy rival Legs With Holes, they have ripped through the rest of the schedule – winning 5 straight games. Yet somehow, none of the teams they’ve beaten has a winning record at this point in the season and only one has scored over 100 points. Including the loss to Legs With Holes, the Aces have seen the 6th softest schedule of all time thus far. It doesn’t necessarily get a ton tougher, with the Dumpy South boasting the 0-6 Heavy Pistols and the 2-4 Strictly Southern… so a playoff spot should be a given…

But the Horsemen have a lot to play for, and nothing is given.

Michael Thomas returns to action this week to join a wide receiver duo in Julio Jones and Will Fuller that has begun to take off. Nearly half of the season without the top receiver on the team has made for a slow start, but this could be the beginning of a resurgence. Le’Veon probably isn’t quite up to speed with his new offense, so he’ll need to take a back seat to the likes of a stable yet unexciting Antonio Gibson or even a potential breakout D’Andre Swift until he’s proven to have re-earned the starting spot. He is somehow nearly 200 points behind Gurley in all time scoring despite playing only one less game.

The Aces have some flash on offense. But nothing that looks unbeatable. Mixon faced an injury last week and there has been radio silence in regards to his status for this week – and DA running back depth is questionable. CEH, despite a strong week 6 performance, will now be splitting reps with Le’Veon Bell instead of Darrel Williams. Lockett could score 30… or 5. The Kyler Murray and DeAndre Hopkins looks to be the main barrier to success for the defending champions and those afternoon games are going to be long and painful.

A loss this week leaves the Electric Horsemen with little breathing room, as they can likely only afford to lose 2 more games this year if they intend on making the playoffs – however much of a longshot that is.

Picks were a disastrous 3-2 last week, bringing us to 22-9. Strictly Southern tumbles another 16 points this week, making this the 5th consecutive week down for them. In week 1 they set a record for most points scored, in week 6 they set a record for least points scored in the 1/2 PPR era. The Horsemen moved up 12 to 21, making a 5 team log jam for the final playoff spot… but it looks likely Straight Laced may be jumping into the fray next week. 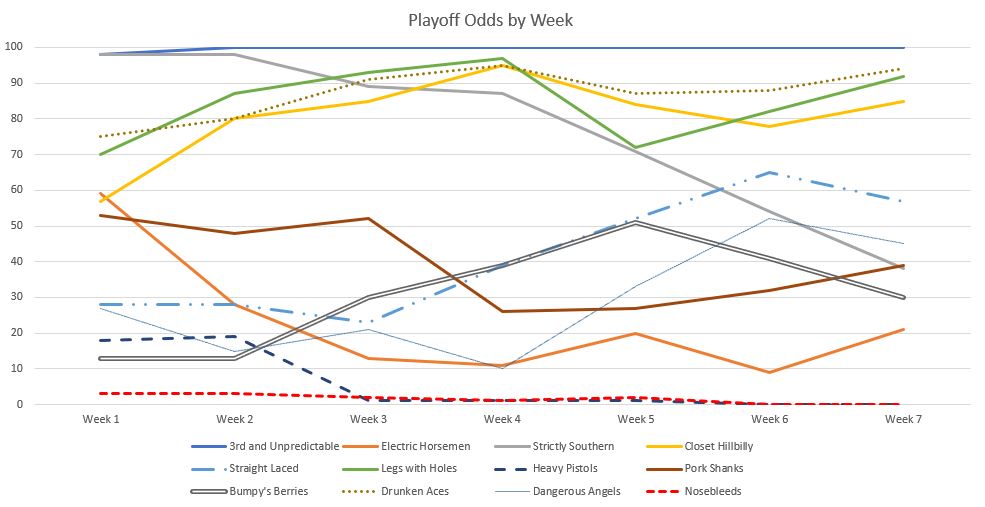 In a lost season, Horsemen look to the future with one year rebuild complete