Week 5 in the Cosmopolitan Outlaw League was a rollercoaster of emotions. A lot needed to happen after Miles Sanders only rush of more than 3 yards that went 75 yards for a touchdown… and after DeVante Parker’s second catch of two in the game… for a touchdown. Matty Lice would have back to back zero touchdown pass games for the first time in probably ever, Antonio Gibson was terrible, Tyler Boyd was terrible, Le’Veon Bell was terrible. Everything was terrible.

But hope was still alive.

Pork Shanks made an extremely questionable quarterback switch, bringing in Jimmy G off a several game hiatus due to an injury… over his franchise quarterback, Drew Brees. The Saints may not have been spectacular of late but Brees’ worst game was 16.5 points. Jimmy was that bit of hope, that freakish mistake that opened the window, he would get benched midway through the first half after scoring -0.92 points. And with the destruction of Jimmy came the destruction of George Kittle who followed up his 32.6 point week 4 with only 6.4.

It all came down to Monday Night Football. Wil Lutz needed 14 points to win the game for the Shanks. Through the first half he would have only 5 points… things looked really good. Then there was a 53 yard 3rd quarter field goal… and things started to get a little puckered. But he needed 6 more points… there’s only a quarter left… just need that clock to keep ticking.

The clock would tick, alright. The Chargers would have a chance to win the game at the buzzer, and thereby winning the game for the Horsemen with Lutz at only 12 points.

Badgley missed off the uprights. The Saints got the ball first in overtime. Wil Lutz kicked a 36 yard field goal to end the game and break the hearts of Electric Horsemen fans everywhere. It would be a 1.64 point victory, the closest game in a season of blow outs.

The Laces come into week 6 with what is quietly one of the best years of the franchise. With playoffs in 2 of the last 3 years, they’re looking to continue their uptrend and do better than their 4th place 2017 finish.

And this time they may not have the Horsemen to stop them in the first round. The last time these two met was week 14, the first round of the 2019 playoffs… when the Horsemen would oust them behind some names that, well, aren’t present right now. Ertz, Michael Thomas, and Dak Prescott would lead the way in the win – the only names in the starting lineup from that matchup are the old stalwarts Julio Jones and Todd Gurley. The only other time Straight Laced made the playoffs (2017) they also met the Horsemen… which meant Le’Veon and Antonio in their prime. A 44 point slaughter.

But the past is the past, and these Horsemen are the worst in franchise history by some metrics. At 1-4 they are 2 games worse than their prior worst start with the second worst points per game and worst adjusted points per game in team history.

Are they really this bad?

While they will be without Michael Thomas (bye), Le’Veon Bell (COVID testing before joining new team), and Courtland Sutton (injury)… do they not have the firepower to knock some other teams around? Julio has returned from his hamstring injury and should be an effective decoy, Matt Ryan has been ousted, Ryan Tannehill has come in to torch the Texans… this could be the week it all comes together before it really gets turned on.

Ronald Jones and Chase Edmonds are making the start for the Laces. Odell Beckham has been throwing up for 2 days. Robert Tonyan now has to battle Devonte Adams for targets. A hard fought battle lies ahead.

The Horsemen are 2.8 point favorites with a 51.1% chance of victory on ESPN with only a 46.9% chance on FantasyPros. This is their 3rd straight game to be favored. They have lost the other two.

Picks were 3-2 last week, bringing the total to 19-6. With a massive pile of 4-1 teams at the top, the availability of playoff teams is scarce. The Heavy Pistols lost by 72.3 this week and scored 71.6, bringing the average margin of defeat DOWN to 76.14 – smashing worst team ever records and worst opponent luck ever records every week. Strictly Southern took the biggest tumble this week in a close one against Straight Laced, but remain projected to make the playoffs despite a 2-3 record. The Dangerous Angels continue to string victories together, jumping 19% this week after toppling Closet Hillbilly for their second straight loss. It would appear the Horsemen, Nosebleeds and Heavy Pistols have absolutely no shot. 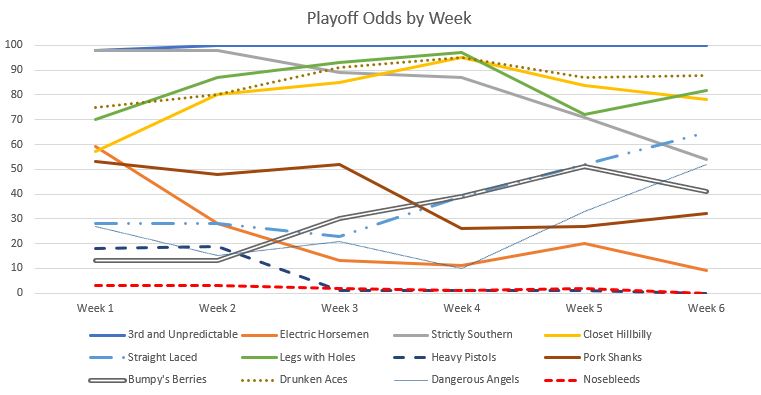 No Replies to "Horsemen Lutz'd in nailbiter"