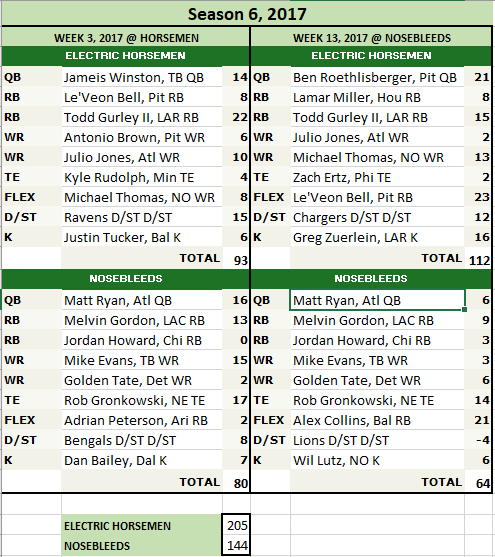 This was not the year of the Nosebleed. After a solid 2016 campaign lending to a 10-3 record and the regular season Inner Loop title they were battered by the Horsemen in the playoffs – this battering appeared to have been a debilitating blow to the confidence of the franchise which would bleed into their on field performance.

The week 2 match up would, once more, show an extreme lack of coaching grit by the Nosebleeds. Not only would they (once again) bench the high draft capital Broncos defense for a lesser team, but they would start the ghost of Adrian Peterson. Gronk provided a brief scare, but the top to bottom better team seems to always be the Horsemen.

In week 13 the Horsemen had the opportunity to sweep the series for the first time since 2015. TheNosebleeds had pretty much mailed in the season by this point while the Horsemen were emphatically laying claim to the first Inner Loop title in team history and looking to roll into the playoffs with some positive momentum.

And roll they did.

The Nosebleeds would be hammered further into obscurity with the lowest scoring output in series history. Once again, they would confusingly bench the Broncos defense. And, once again, they would lose – owing 61% of the entry fee for the 2018 Horsemen and leaving the JW Memorial Trophy in the hands of the Horsemen for the 5th straight year.

The 2016 series began with a defensive battle. Meaning that the Nosebleeds started the Ravens over their coveted Broncos defense so as not to be playing against Andrew Luck. I guess they’ve never heard of hedging. Starting the Broncos would have brought them within 3 points… starting Melvin Gordon over the broken down Adrian Peterson (or the broken down Rashad Jennings) would have given them the easy win. Fortunately, the Nosebleeds aren’t known for logical decision making and, despite a poor performance by the defending champions, they were unable to capitalize.

Their second meeting to finish off the regular season didn’t go quite as well for the Horsemen. Despite decent output from their core starters aside from Lamar Miller, as well as an effective kicker substitution after Gostkowski continued to disappoint. The inconsistent Luck came in with 2nd best game of the year and Jordan Howard was gifted a game against the 49ers – which would be the best of his career. With no truly elite performances, the Horseman would fall miserably. The 34 point deficit would be their worst loss of the series and would break up a 4 game winning streak against the ‘bleeds.

For the first time in league history, The Battle of TC Jester would be decided by a playoff tiebreaker. And it would be disgusting.

The pieces all came together for the Horsemen running game with Gore, Bell, Miller, Blount, Dixon and Powe

ll all scoring double figures. Of course, they all weren’t starting… but it wouldn’t have mattered which combination had. Gordon went down early while trying to recover a fumble, Jordan Howard didn’t get to play the 49ers, and Andrew Luck was just regular old Andrew Luck. The Horsemen would follow up their 34 point walloping with a 39 point one of their own. The 3rd biggest loss by the Nosebleeds for the 4th straight BOTCJ title and the opportunity to play for a 2nd straight COL championship.

2016 marked the end of the original rivalry agreement. 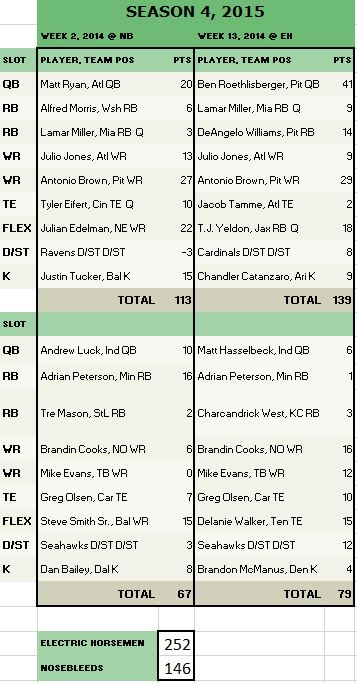 Ranked 1st in the preseason coaches’ poll and coming off a huge revenge game against the defending champions, taking it to the Nosebleeds was the next essential step for having a successful season and getting over the hump. The Horsemen had barely slipped by the prior two years and coming into 2015 we’d yet to see the dreaded season sweep.

Was this team different? Or were the Nosebleeds just completely terrible? It may have been a little bit of both.

The Nosebleeds would start the series off with a bang in week 2 – scoring the least points in the history of The Battle of TC Jester. The golden boy and franchise quarterback, Andrew Luck, would perform in stark contrast to the 2014 version that put up the most points in history. And while the ‘bleeds were floundering, the Horsemen were in their regular early season groove – putting up 113 points let by an Edelman-Antonio 1-2 punch and a serviceable performance by Matt Ryan, for once. It wasn’t even close, and the Nosebleeds would once again lose the first game in the yearly series. 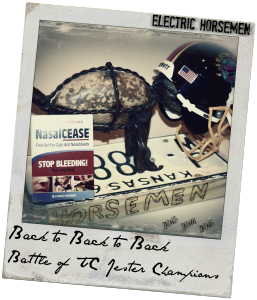 It would come down to Week 13 again. The Nosebleeds had already locked a playoff spot and now had their opportunity, once again, to knock out the Horsemen. In 2012 and 2013 the same scenario had played out, and in both years the Nosebleeds went to the playoffs and the Horsemen went home. Team records were misleading this time around, the 6-5-1 Horsemen were leading the league in scoring – 20 more PPG than the Nosebleeds… who were 8-4 coming into the finale.

It was a complete embarrassment.

The Horsemen would follow up their dismantling of the Nosebleeds in week 13 with a round 1 playoff curb stomping – winning the BOTCJ, advancing to the COL championship, and getting free 2016 entry courtesy of the Nosebleeds. 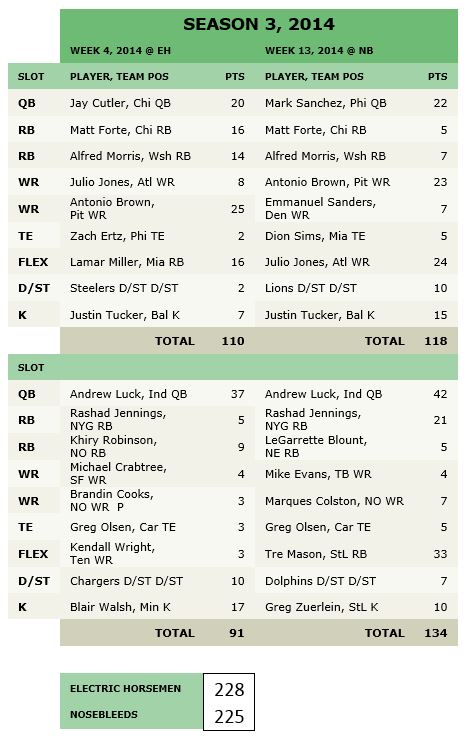 The 2014 BOTJC would become an offensive explosion. The Horsemen came out strong with performances across the board from all of their key players, while the ‘Bleeds were kept afloat by a record setting game by Andrew Luck. He would score more points in a single game than any player in the history of the rivalry, with 37, while the only other double digit showings came from the defense and special teams squad and kicker, Blair Walsh.

The lead was 19 after the first game in the series, and aside from a questionable character at quarterback to end the season the Horsemen came into the finale with high confidence. Once again, Andrew Luck would assault the Horsemen with a ferocious game, breaking the single game record he set in the previous meeting with 42 points this week. Things seemed bleak and the Horsemen needed every possible catch by Dion Sims in the Monday night finale to push back ahead, losing the 2nd game of the series – but taking home the trophy.

Antonio Brown proved to be the MVP of BOTCJ III, setting the record for combined 2 game points by a non-quarterback with 48 – slipping past the previous record holder, Adrian Peterson, who totaled 47 the previous year. Andrew Luck would finish with a record setting 79 combined points in the loss.

Not unlike any other year, BOTCJ II began wit

h a flurry of scoring by the Horsemen. Matt Ryan and Matt Forte led the offense, but the Titans D also got in on the act – scoring 22 points, what remains to this date the most points scored by a D/ST in the history of the series. Aside from troubled running back Darren McFadden, who only got playing time because he was the first ever Electric Horseman, everything seemed to be humming.

Game 2 of the series was a dud. There were only 179 total points put up, but the 21 points by Adrian Peterson were enough to barely avoid the sweep in what would be an extremely lopsided affair. Most Valuable Player Matt Forte and the Electric Horsemen emerged triumphant to take home the trophy for the first time.