Horsemen launch into playoff picture with narrow win over Angels

Bumpy’s Berries and the Electric Horsemen have a lot of history. They first met opening weekend in 2012, a Horseman victory behind a 59 point Matt Ryan/Julio Jones stack. They continued to meet opening night for the next two years – the final results were more or less the same. In 2015 they would meet in the championship game… where Julio, Antonio and Derek Carr would handle them easily for the first of three Electric Horsemen championships. In all, they’ve met 9 times. In those 9 meetings, the Horsemen have won every.single.time. Of teams around before the PPR era, the Horsemen average the most against the Berries – 117.19. Every year it seems like something is going to give, maybe the domination will fall apart. It doesn’t.

The 6-4 Berries are in the midst of their best season since that 2015 championship appearance season, going over 50% for the just the second time in franchise history through ten games. They lead the Horsemen in scoring on the year by 3, but have had 160 less points scored on them by opponents – leading to their one game lead. The path to their third playoff appearance is not an easy one, though. They end the season with the Horsemen (5-5), Dangerous Angels (6-4) and Straight Laced (6-4), a gauntlet of potential playoff teams looking to clinch a berth.

The team is more or less in disarray. Longtime Berry, Devonta Freeman, is unlikely to play – and former Horseman, Emmanuel Sanders, is questionable with a rib injury. Aaron Jones is also on bye this week, leaving their only viable starting running back as Damien Williams – a player that has broken 10 only 3 times this year (and is also an ex-Horseman). Jared Goff could easily score 2 points if he earns the start over Brissett – but Brissett could easily leave early if his injury flares up. Keenan Allen has been a huge disappointment this year and Cooper Kupp, having an incredible season, somehow scored 0 last week with 0 targets after averaging upwards of 10 the rest of the year. D.J. Moore is in a good place to perform this week… and maybe the Patriots defense.

The Electric Horsemen are still waiting to hit their stride. The acquisition of Dak Prescott from 3rd and Unpredictable has been a huge boost to morale, as they’ve seemingly exited quarterback limbo and have a top 10 guy every week. Aside from tight end, the entire team has favorable matchups and are looking to renew the fire of Horsemen past. Meaningful bye weeks have been exhausted, and the Horsemen should have their core lineup ready to roll for the rest of the season – barring injury.

The Horsemen are favored by 31.5 points (using projected starters) with a 60.8% chance of victory on ESPN, and 80.3% on FantasyPros. This point spread marks the highest the Horsemen have had in 2019.

Berries’ starters are projected, as they continue to set fake lineups in order to keep their own players unprepared and guarantee additional losses.

Bumpy’s Berries went careening down the projected standings with a surprise upset at the hands of Legs With Holes. But in all fairness, this was no surprise. As predicted, the Trojan Horseman (Emmanuel Sanders) sabotaged the Berry victory by leaving early with a “rib” injury. They now face the Horsemen head to head in a game of massive playoff implications. There were no other significant movements in the projections with last year’s championship game participants more or less locked into playoff spots. The bottom 5 teams all sit at 3-7 – which, while not mathematically eliminated, would suggest that they will not make the playoffs (no 7 loss team has every made the playoffs). Alternatively, only two 7 win teams have missed the playoffs – this year could potentially introduce a third. 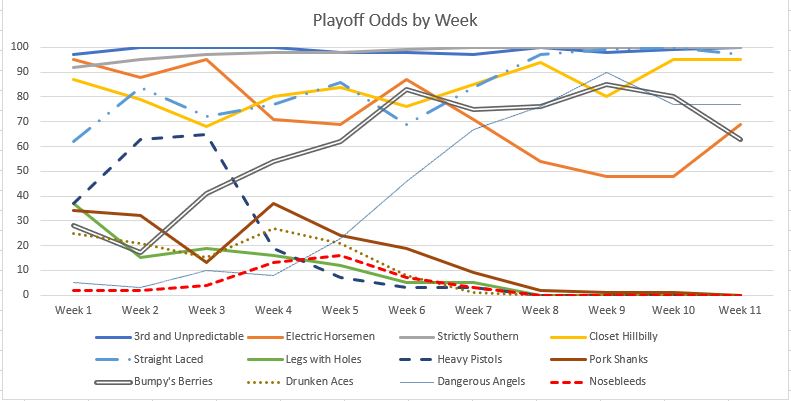